TS NPB app download: Lately, the Telangana government has been doing door-to-door surveys for the Non-agricultural Properties Updation of state citizens through an app called TS-NPB. The survey is in its pace now in all the districts, and more than 60% of the estimated lands have been identified and listed down on the TS NPB app to date. The Khammam district has been leading the survey in terms of enumerating the property data all over Telangana. 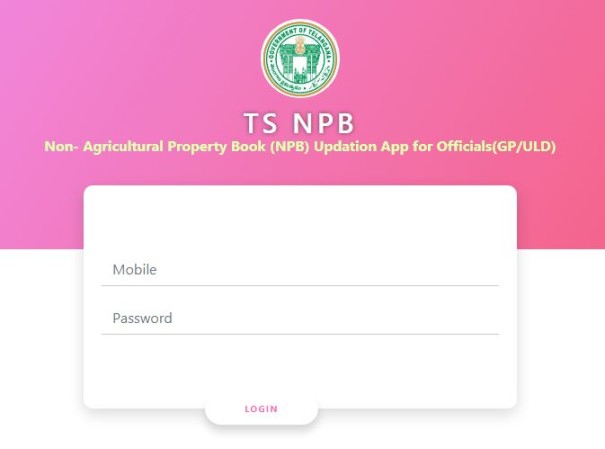 Numerous government teams have been deployed for listing the Non-agricultural Property data through the TS NPB app. The survey has been conducted all over Rural Local Bodies and Urban Local Bodies of all 33 Telangana districts with an estimated population of 35,003,674 entirely.

As per sources, it has been speculated that all the data collection and updation process would get completed until October. Focusing on this, the Dharani portal might launch near the Dussehra festival. Once all the data has been uploaded, and the portal will get launched, the non-agricultural property owners will receive their maroon-colored pattadar passbooks.

The Telangana government has been making all these efforts and policies for land record management and making all the property-related transactions hassle-free and smooth in the future.

The TS NPB enrolment has been going on for quite a few months in Telangana. The Dharani portal’s enrollment requires sensitive details like Aadhaar card number (of the owner and all the family members), bank details (in case of joint property) that has raised privacy concerns amongst citizens of Telangana. During the enrollment process, many survey teams have to return bare hands as citizens cannot share their sensitive details. TS NPB Dharani enrolment consists of a “Caste” section (SC/ ST/ BC/ OC/ Minority), which is also a complaint by many citizens.

The tsnpb.telangana.gov.in will make you reach the official homepage of the TS NPB app. From there, one can enroll, install the app, or even download the TS NPB app user manual into their system. After downloading the user manual pdf, you can go through a complete step to step guide about the enrolment process.

Many speculations have revolved around the internet and social media about the ts npb survey and the Dharani enrolment process. However, the GHMC “Greater Hyderabad Municipal Corporation” commissioner Mr. Lokesh Kumar has eased down all such speculations and questions through his latest press conference.